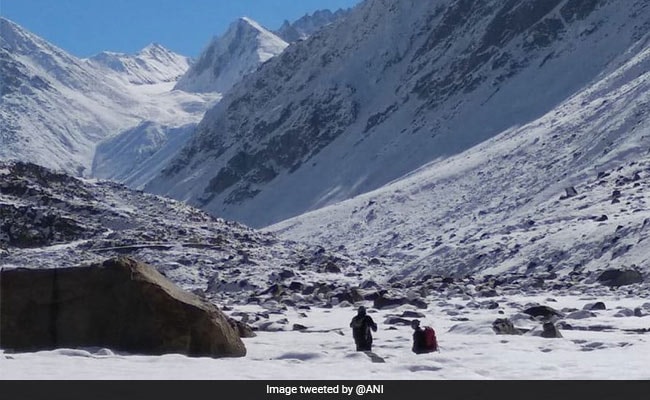 The trekking expedition started from Manali on September 17

Indo-Tibetan Border Police (ITBP) personnel today carried two bodies on stretchers for 27 kilometers and brought them down from 18,000 feet from Lahaul and Spiti district of Himachal Pradesh.

As per a statement released by ITBP today, two bodies of trekkers from West Bengal who died on a high altitude trekking expedition on September 24 and 25, along with four porters were brought down to Kaza, Himachal Pradesh.

“The rescued people and the dead bodies are handed over to Kaza Administration in the presence of the Sub-Divisional Magistrate (SDM) and Additional District Magistrate (ADM) Kaza, Himachal Pradesh. The four rescued porters are now kept under observation in Kaza hospital,” read the statement.

“The dead bodies were carried on stretchers on foot by the men of 17th Battalion ITBP to the nearest road head which is approximately 27 Kilometers away from the glacier point,” the statement added.

The ITBP further informed that the rescue mission has now been completed with a total of 15 rescued people and two dead bodies found.

A joint team of the ITBP, army and civil administration had been launched today from Kaza for a rescue mission towards the higher reaches of Manali-Khamengar Pass- Manirang in Lahaul-Spiti, Himachal Pradesh.

The trekking expedition started from Manali on September 17. On September 25, while the team was passing down from Khamenger Pass, two members — both from West Bengal — died due to mountain sickness.

‘Drive My Car’: Ryusuke Hamaguchi revs up for the Oscars BlogM - To reveal all dark secrets